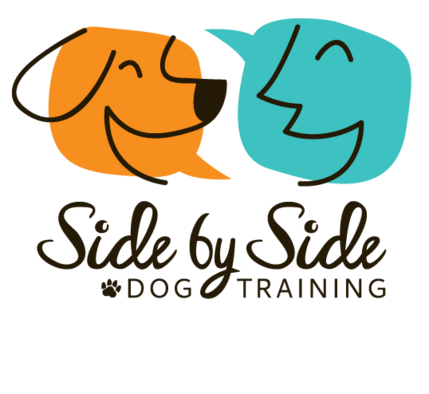 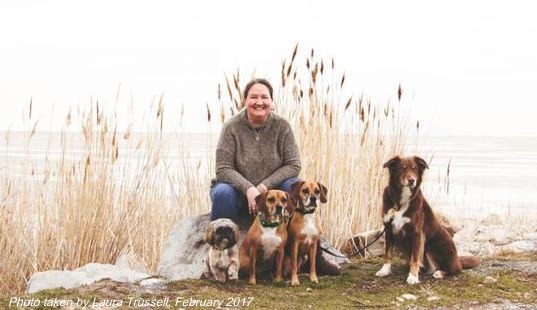 About Side By Side Dog Training

I train all dogs by helping them understand what is is that we want them to do — puppies and adult dogs, adopted and rescued dogs, reactive and aggressive dogs, shy and fearful dogs, competition and getting ready for competition dogs (Rally, Obedience, and Scent), therapy dogs, crisis response dogs, and service dogs.

I have a “whole dog” approach to training. I know dogs react and respond to their humans, their environments, their diet, their exercise, and other factors in their lives. In order to best help dogs to live in a human world, all of these things need to be taken into account. My training, behavior modification, and management plans are based on the whole dog and his/her life and life style.

In order to be the best trainer and instructor I can be, my belief is that I have to personally experience/participate in the things I teach. So, when I am teaching a class or a private session, you not only are getting “textbook” material, you are also getting “experience” material. I am passionate about my continuing education and take every opportunity I can to attend conferences, seminars, workshops, and online events.

I am the only dog trainer in Utah with my qualifications, certifications, and education (see below for more information and for a link to my full resume). 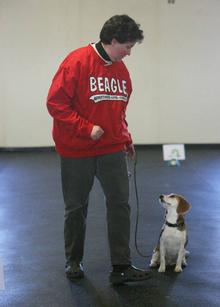 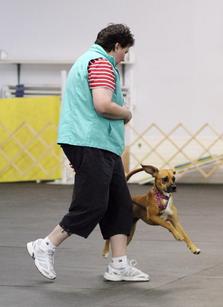 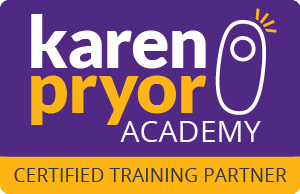 Stayce has been assisting with Foundations classes (Puppy Great Start, Dog Stars, and Help! I Have a Teenaged Dog) since early 2018. She is an advocate of lifelong learning, and has taken dozens of courses (both online and in-person) and has spent thousands of hours reading and researching. She fully believes in making the human/dog relationship better by continued training, mental enrichment and having fun together.

Stayce and her dog, Hannah (a rescue Staffordshire Terrier mix) are a therapy dog team with Alliance of Therapy Dogs. Hannah has passed the CGC, CGCA and CGCU evaluations and has received Novice & Intermediate Trick Dog titles, as well as C-WAGS Rally titles. They enjoy participating in Rally, Obedience, Scentwork, Parkour and Fitness together. Stayce also works with her mom’s Pug, Angus.

Stayce is a Certified Professional Canine Fitness Trainer, Reiki II practitioner, and an ATD Tester/Observer. She is currently working towards a dog trainer certification and a Pet Food Nutrition Specialist certification. As a CPCFT, she focuses on building confidence, body awareness, balance, and strength through safe and fun exercise programs. She is the only CPCFT in Utah and is excited to bring her knowledge of canine fitness and well-being to Side By Side, as well as private training sessions. 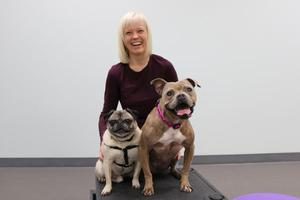 Doreen has done hands on training with Laurie since 2014 and has done a lot of research reading books on training. She has a Certificate of Completion for Dog Trainer Foundations from Karen Pryor Academy as well as having completed Certification for TAG teach Primary Level.

Doreen has been assisting with Puppy Great Start class since 2016. She has great fun mentoring the play time with the puppy group. She does games, puzzles, targeting, socializing with objects, and bonding with our puppies. Doreen also teaches the Tricks portion of our CGC/Tricks class.

Doreen has 5 dogs, a Flat Coat Retriever, Jett; a Corgi, Newt; two Miniature Dachshunds’, Dot and Katie; and a Golden Doodle, Dudley. Jett and Newt are currently doing training classes with Laurie. She also has 6 horses, three Morgans and three Miniature horses. She does clicker training with her minis and is currently working on trick training with them. She is working on trick titles for Jett and Newt and working on Trick Training Instructor Certification for herself.

Doreen is also available for private sessions and especially enjoys working on tricks. 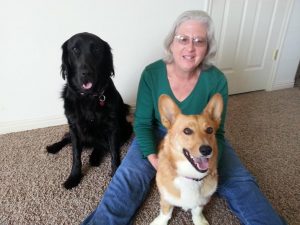 Elizabethanne Stevens, CAP3, began dog training in 1997 and, in the ensuing years, has devoted herself to furthering her education and advancing her skills.  Elizabethanne and her talented miniature poodles have competed and earned titles in agility, musical freestyle, obedience, rally, conformation, nosework, tricks, games, and tracking.  She has a fondness for concept training and was the co-Grand Prize winner of the 2011 Canis Film Festival for her video of teaching her poodle, Chase, a visual match to sample.  Watch the video here:  https://www.youtube.com/watch?v=tj_mkJ2o6gA

Elizabethanne earned her CAPs 1 through 3 with Distinction and was a CAP (Clicker Trainers Competency Assessment Program) assessor for several years.  She is a Rally, Obedience, Scent, and Games Judge for the Canine Work and Games organization.  Elizabethanne teaches specialty classes at Side by Side, including Competition Obedience, Canine Musical Freestyle, On Target, and Agility Foundations. 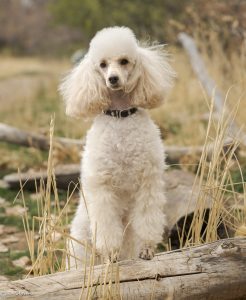 Karl Schlossnagle
Karl is our equipment builder, accountant, and overall support person.  He helps keep our ship floating!  Karl never had a dog until he married Laurie in 2012 when she moved in with three!!!  He is a registered therapy dog team with Dolly and you will often find him attending classes with any of the family dogs.  He also helps with reactive/aggressive dog private sessions by handling the neutral dog.

Meagan Buchele
Meagan is a life-long dog handler.  She assists in class, helps with the mountains of paperwork, and provides neutral dog handling for classes and evaluations.  Meagan is a C-WAGS Rally Judge and competitor with multiple titles.  She has two dogs — a beagle mix, Elphie and a cardigan corgi, Auggie Lou.  Meagan and Elphie are a registered therapy dog team.

Kendra Buchele
Kendra is also a life-long dog handler. She has been participating in classes most of her life and has been an active dog sports competitor since she was 9 years old (with multiple titles in multiple venues with multiple dogs). She regularly participates in continuing education opportunities including: ClickerExpo 2015, Michele Pouliot Workshop (February 2016), and Ken Ramirez Seminar (November 2014).
Kendra has one dog — Rafael, a Shih Tzu. They recently became a registered therapy dog team. She handles Laurie’s dog, Blitz, in Rally and she, Laurie, and Karl share Dolly for therapy dog work.

Laurie has extensive, documented experience in dealing with a wide range of dog breeds, behavior issues (including aggression), training plans, and management protocols. She regularly attends educational events to further her knowledge and expertise and to maintain her certifications. Laurie graduated from the Karen Pryor Academy in May 2014 in their Professional Dog Trainer Program.  Most recently, Laurie has participated in weekend seminars with Ken Ramirez, Grisha Stewart, Michele Pouliot, Theresa McKeon, Joey Iverson, and Hannah Branigan, ClickerExpo in March 2015, and ClickerExpo in January 2016 (3-day educational conferences for positive reinforcement animal trainers from all over the world), and the Pet Professional Guild Summit at Best Friends Animal Sanctuary in April 2018.  Laurie regularly takes online classes offered by the Karen Pryor Academy and the Fenzi Dog Sports Academy.  Laurie and her dogs also take local, in-person classes whenever possible — most recently Laurie and Blitz learned about Canine Musical Freestyle!

Laurie has three canine partners of her own — Dolly (beagle/ridgeback mix) — they worked together in the Karen Pryor Academy, do therapy dog work together, and are competing in Scent Work, Rally, and Obedience.  Blitz (australian shepherd mix) and Laurie spend time working on Rally, Obedience, Agility, Canine Musical Freestyle, and tricks.  Blitz is a wonderful traveling companion and they enjoy many adventures together. Emme is the youngest in the family (beagle) and together, they are working on Rally, Conformation, and Scent Work with an eye on therapy dog work.

Laurie is honored to have an extended family of dogs too!  She and Rafael (shih tzu) do therapy dog work together as well as occasionally traveling and trialing together in Rally.  Laurie and Elphie (beagle/ridgeback mix) have earned titles in Rally (APDT and C-WAGS) and Obedience (C-WAGS). Laurie and Elphie have also ranked nationally in APDT Rally.  They also do therapy dog work.

And the dog that started it all…Laurie and her beagle, Daisy, earned titles in Rally Obedience and Obedience — AKC (American Kennel Club), APDT (Association of Pet Dog Trainers), CDSP (Companion Dog Sports Program), and C-WAGS (Canine Work And Games) including several championship titles. Laurie and Daisy earned High in Trial three times — once in Rally and twice in Obedience and ranked nationally in APDT Rally. Laurie and Daisy were therapy dog partners and got their start listening to first graders read their poetry notebooks in Laurie’s daughter’s classroom.  Daisy was the dog that led Laurie to positive reinforcement training and so much more.  Daisy is fondly remembered and much missed.

Laurie is married, and between them they have three daughters, one son, two daughters-in-law, six dogs (granddogs included!), chickens, a rabbit, and fish.

Laurie is a Founder and Director of Paws With Compassion — a canine crisis response and therapy dog group.  She and Daisy volunteered on the campus of Northern Illinois University in DeKalb, Illinois for the anniversary of the campus shootings and at the annual National Parents of Murdered Children (POMC) Conferences in Cincinnati, Ohio, Philadelphia, Pennsylvania, and Milwaukee, Wisconsin.  (With Dolly, Elphie, Blitz and Rafael, they also served at the POMC Conferences in Rochester, Minnesota, Orlando, Florida, and Irvine, California.) She and Daisy served in Lake Township, Ohio to support those affected by the June 2010 tornadoes. Laurie went to Aurora, Colorado in the aftermath of the movie theater shooting.  Laurie and Dolly responded to Newtown, Connecticut and the Sandy Hook School shooting.  Laurie, along with her dogs, is a regular presenter at POMC’s Annual Conferences.  She presents on several topics, including Therapy Dogs in Chapter Meetings and K-9 Responses to School Shootings with Multiple Victims. Laurie and Daisy (2012) and Laurie and Dolly (2013 and 2016) have earned C-WAGS’ “Doing Others Good” Award for their work in crisis response. In 2016, Laurie was given the Extra Mile Award at the Annual POMC Conference in Orlando, Florida.